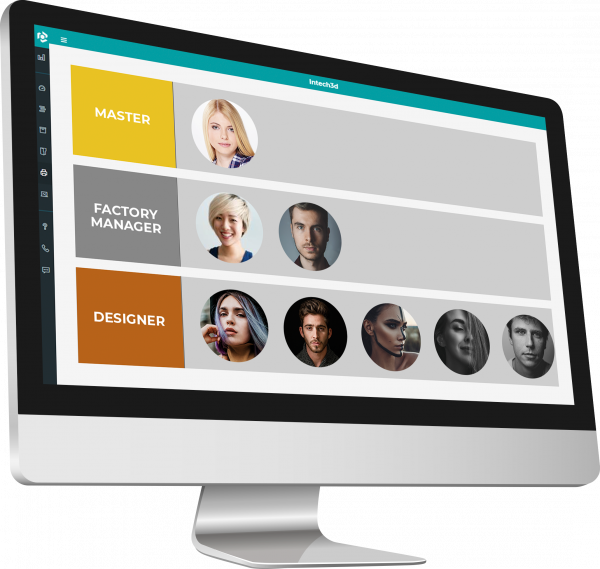 MULTI PROFILE PACK PRINT&GO. The Fee is on a monthly basis.

One is sometimes not enough. Create your own users and decide what role will have each one in your company. This way, you can restrict their actions and identify who is responsible for each of them. 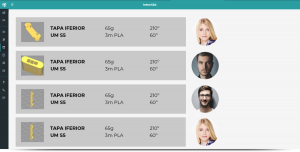 Create different users and determine their roles with different access and hierarchical permissions. With this functionality you will be able to manage as many factories as you wish and establish the following roles:

Master: Senior user who has the responsibility for the total administration of the platform in all factories.

Factory manager:User with the highest level of hierarchy within his own factory and who authorizes the production of the projects created by the Designer.

Designer: User who can create and modify projects, upload and request printing, as well as delete and cancel his own projects.

Operator: User in charge of running the prints, authorized by the Factory manager, as he can accept the tasks to print the 3D models, remove them and, in case of failure, even resume them. In addition, he also has other permissions related to the configuration of the printers, such as preheating before starting manufacturing.

With the profile hierarchy, roles with more permissions can activate the functionality to restrict the actions of other users and have full control of the permissions.

PRINT&GO informs you, at all times, of the different tasks and users that have been part of the entire 3D printing process. This way, you will be able to identify which user has executed each step and have total control of each print.

Establishes a hierarchy over the user who uploads the 3D models, the one who accepts them for production and the one who receives the final print order.

With the new task review tool, the most senior and responsible user will also have full control of the print queue. This way, when accessing the task repository, he will accept or deny the projects that other users have added to the print queue.

There are no reviews yet.

We use cookies on our website to give you the most relevant experience by remembering your preferences and repeat visits. By clicking “Accept”, you consent to the use of ALL the cookies.
Cookie settingsACCEPT
Manage consent

This website uses cookies to improve your experience while you navigate through the website. Out of these, the cookies that are categorized as necessary are stored on your browser as they are essential for the working of basic functionalities of the website. We also use third-party cookies that help us analyze and understand how you use this website. These cookies will be stored in your browser only with your consent. You also have the option to opt-out of these cookies. But opting out of some of these cookies may affect your browsing experience.
Necessary Always Enabled
Necessary cookies are absolutely essential for the website to function properly. This category only includes cookies that ensures basic functionalities and security features of the website. These cookies do not store any personal information.
Non-necessary
Any cookies that may not be particularly necessary for the website to function and is used specifically to collect user personal data via analytics, ads, other embedded contents are termed as non-necessary cookies. It is mandatory to procure user consent prior to running these cookies on your website.
SAVE & ACCEPT